Latin American Cupid Review: Is It Any Good?

If you’re searching for a way to meet Latina beauties then you’ve probably heard about the LatinAmericanCupid. It has a lot of mixed reviews from guys that may or may not have tried it first hand.

There are lots of other options out there so you might wonder how does this one stack up against the others? That’s what I’m going to talk about in my latinamericancupid review.

I’ve traveled extensively over the last decade and stayed in a few South American countries for extended periods of time. Keep reading and I’ll reveal the good, the bad and the ugly of LatinAmericanCupid.com, as well as what you can expect on the site…

Latina women… They are really something else, passionate is one of the best words to describe them. You will find a wide variety of women on here with most being above average looking and a few stunners mixed in!

Besides looks, I was pleasantly surprised to find that most were well educated and spoke decent English which is nice if your Spanish is as bad as mine.

Just like every other site there are a couple types of women you’ll encounter. Which ones you go for will depend on your goals.

Definitely worth a couple $ per day :p

The term “gringo” basically just means foreigner in the Spanish Language. There are some Latina women that like western guys so much they will pursue you, basically hunting you down in the process.

These women are easy to spot as their profiles will be sexual and they will be very receptive to your messages. If you have blond hair and blue eyes they will find you VERY attractive as that look is so rare out there. I don’t have blond hair but still found plenty of success.

If you’re looking for something serious then don’t worry there are plenty of women on there that want to find a good foreign man. Lots of guys including a couple friends have gotten married to Latina women that they met online. They will make you wait longer to get physical but the wait is worth it 100%.

There are numerous reasons why I like it on here. I’ll highlight the positives that you need to know about. 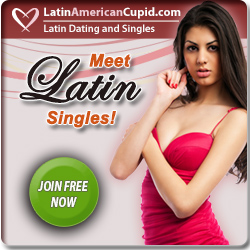 Just going by some basic statistics, the more women that are available, the more of them that will be hot by distribution. I’ve noticed that the huge selection of members enables me never run out of women that I want to talk to.

Just like in other countries, as a westerner, you have a lot more status with the Latin ladies. This is a great for us as there are many more ladies that are keen to meet. You also have the advantage of Geo arbitrage. This means that if you choose to live or vacation in South America you can live on much less money than a western country. For example, you can live like a king in most of these countries for around $1500USD per month.

I don’t believe in fairytales and neither should you. Although I like Latin Cupid there are a couple things to take into consideration.

Latinas Will Distract You

If you’re a businessman then you need to make sure that you are keeping tabs on business and not on the Cupid sites all day flirting with girls! For guys that aren’t used to the world of foreign women it can be too much temptation to resist. They get addicted to messaging and meeting hot girls and don’t do much else.

If you have some self-control you’ll be perfectly fine though. I believe in balance and set aside 1 hour per day to chat with girls.

Most guys don’t like the fact that Latin American Cupid costs money to use most of the features. You can browse for free but can’t message the girls. I see this as a positive and I’ll explain why.

As men, we will always have to invest money when it comes to traditional women and Latinas are no exception. Signing up for the platinum membership of this site will only cost between $12-40/month depending on how long you sign up for.

Let’s put that into perspective. A 12-month membership will come out to less than 50 cents per day… I don’t know about you guys but I used to spend hundreds of dollars per month on meeting women in the states so spending less than a dollar a day to chat and meet with higher quality women is a no-brainer to me.

Is Latinamericancupid a Scam?

“Don’t send money to women you haven’t met before in person.”

That’s it, guys! There’s not much else to it. A scammer will resist even talking on Skype with you so if you experience that then it’s a red flag.

Overall this is my go-to option when it comes to finding some high-quality Latina dating. The site is super easy to use and has a great advanced search feature. Click the button below to sign up for free today and check it out!